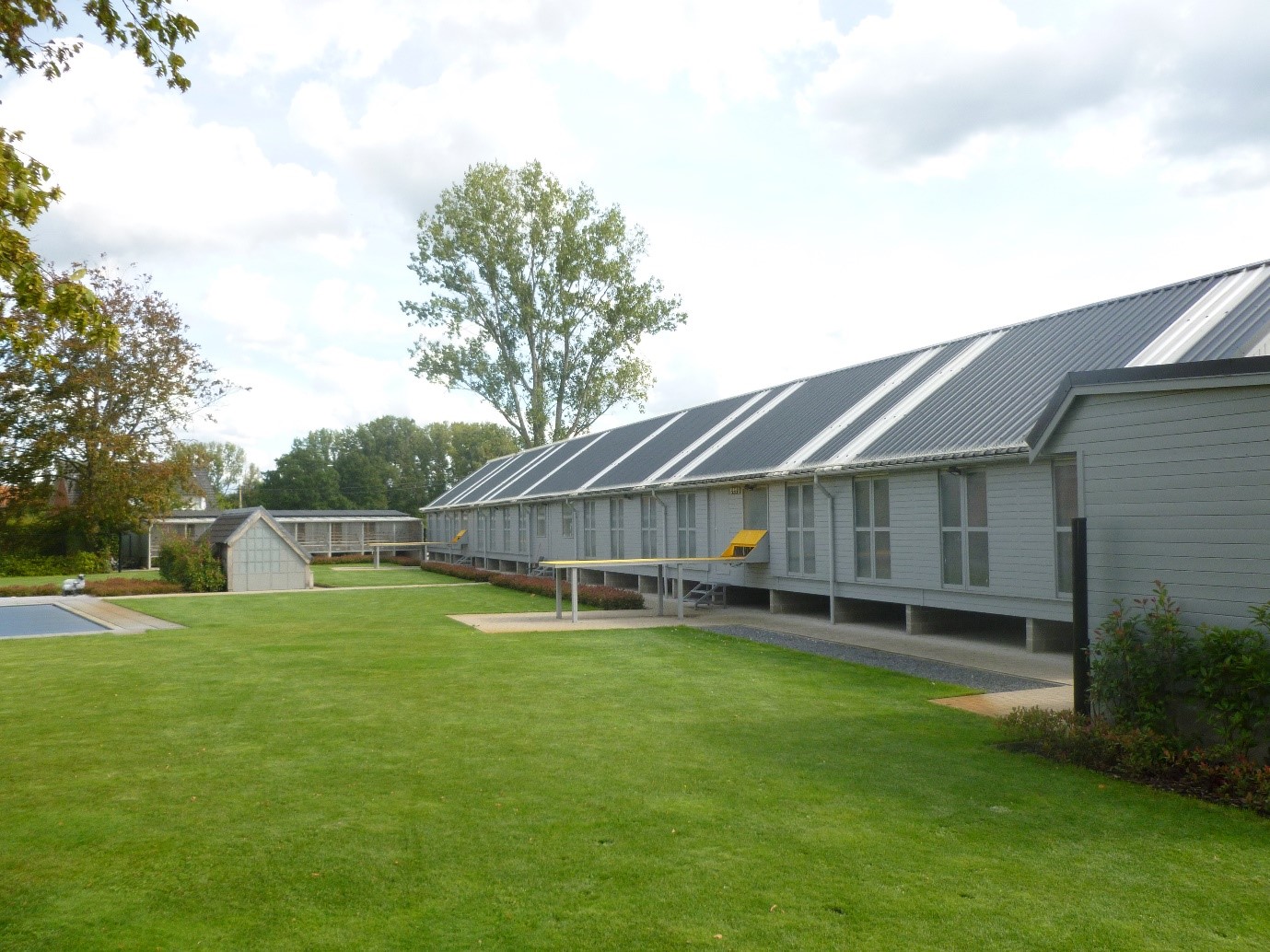 I hope Bart doesn’t want the same outcome for Nancy!

When you visit Bart and Nancy you are going to be greeted by a family that love their pigeons and love life. You will also see a set up that will “take your breath way”. 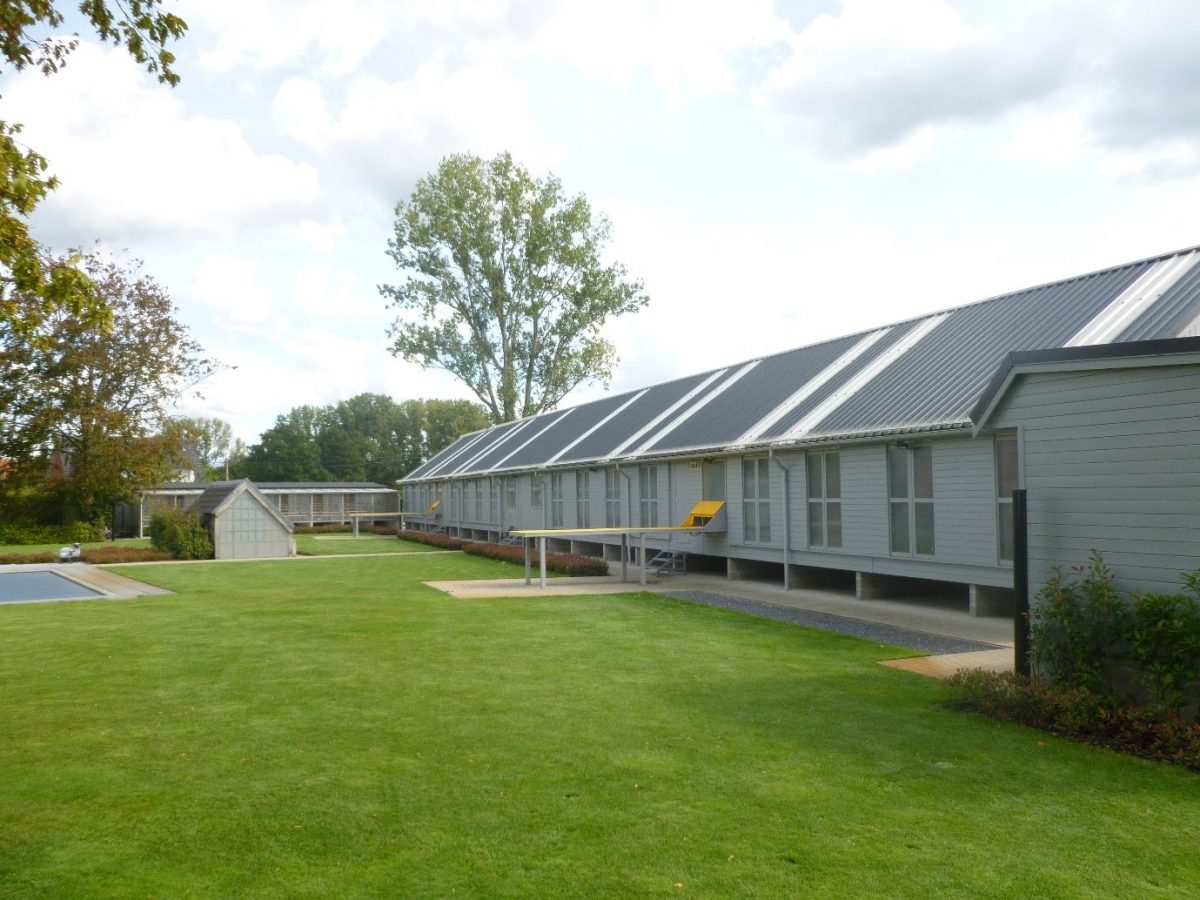 They are a family that work hard to achieve success with their pigeons and have and do work hard in their business also. The saying “work hard play hard” could have been meant for them.

Bart’s Father raced pigeons and Bart would help when he was a younger but on turning 18 he lost interest, mainly due to the long hours he was working in the family business, a bakery.  Then when he turned 30, he suddenly rekindled his interest in racing pigeons and started to race them in the backyard of the bakery.

In the early years of racing Bart raced birds from local fanciers. In 2007 he had a helper and he had direct Geerinckx birds and wanted to sell of his pack of Geerinckx pigeons. The birds were then split up between himself, his Father and Jan Broeckx (Niels Broeckx, Oud-Turnhout) and in Bart’s birds he had the brilliant Black Diamond, the sire of F16 amongst others. The loft is now known as Diamond Loft. There were some great pigeons obtained in this group of birds for both Bart, his Father and Jan Broeckx. These birds set Bart on the road for success.

Today’s racing is in partnership with his lovely wife Nancy, who incidentally was the one that would not sell F16 when the money men came calling, wise move some might say.
Since 2007 the results and performances have been exceptional.

They prefer to race in races that basket on a Thursday, so 500 to 600 KM races. Since they moved to their new set up, they have begun to build a team for races from 700 to 800 KM. To help with this they have introduced birds from the Herbots family, Gino Clique and Ivan Baetens, both of whom are very strong at these distances. Bart is honest and says the results from the birds brought in for the longer distances have not been what he wants, yet. He says it takes time, especially with birds that fly the longer distances, and he will give it another two seasons.

They pair in early December and breed from stock birds until June, some exceptional pairs they breed from longer. He does not have many theories when selecting pairs, winners to winners is always the best way. He also uses common sense in a big bird to a small bird, long to a short etc.  No inbreeding occurs, only when the Chinese order them and they cost more money!

The number of Young Birds bred will make those that have a problem with big teams have a heart attack: they breed and wean around 480 birds! They are not all raced at the same time as they are from four rounds. One team is for one distance and the other for the longer distances. Some race at the beginning of the season and others not until August.

When the season is over, they will have lost around 50% of YB from racing, sickness and hawks.  Bart is happy at this percentage as most other big lofts in Belgium are losing up to 75% of their young birds. His aim is to have 185 yearlings each winter that will race the two disciplines, 5-600 Km and 6-700KM the following season.

He medicates his stock birds before pairing with vaccinations against Paramyxovirus and Paratyphoid. They treat in the water for Salmonella and a tablet for Canker. When on eggs they then vaccinate against Herpes. He will use the Bull system for his top cocks. 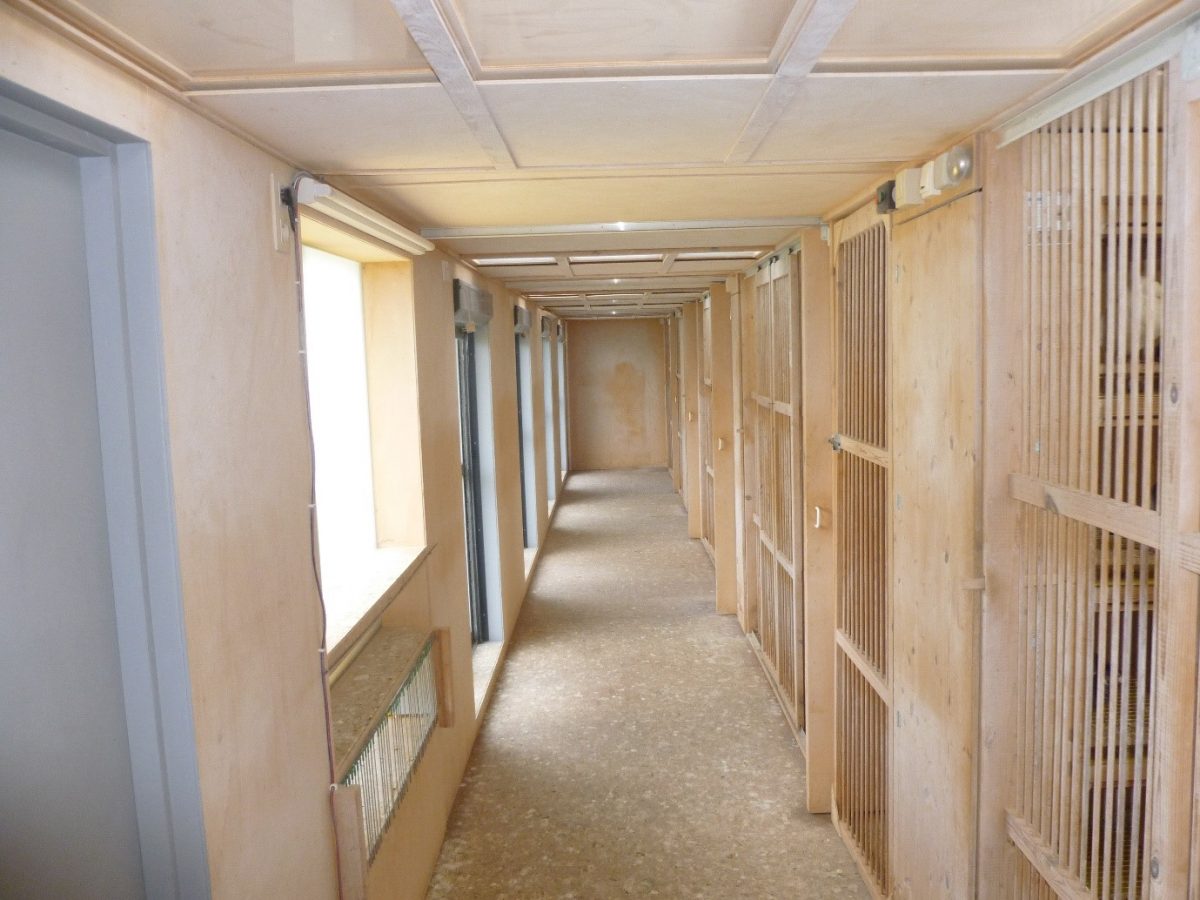 He weans his young birds (if it is cold) when they are 25 days old. When it is warmer, he feels it is not so important. They wean once a week so the age can vary of the young birds. When he weans he vaccinates immediately against Herpes and then for Paramyxovirus 4 weeks later.

They do not experience young bird sickness to any great degree. Some second round this year had a little, but generally it is rare.

I wonder if the vaccination program Bart uses is a reason for this?

The young birds receive the famous yellow drops on their feed twice a week, this is the treatment for Canker. One bottle to 10 kg of food. As it is not an antibiotic, he has no issue with this treatment and frequency.

Fourteen days after they are weaned, he lets them out onto the trapping boards, but the boards have an aviary over them. He uses a bell when it’s feed time and gets them used to this system before taking the aviary away and allowing them to start exploring and flying. 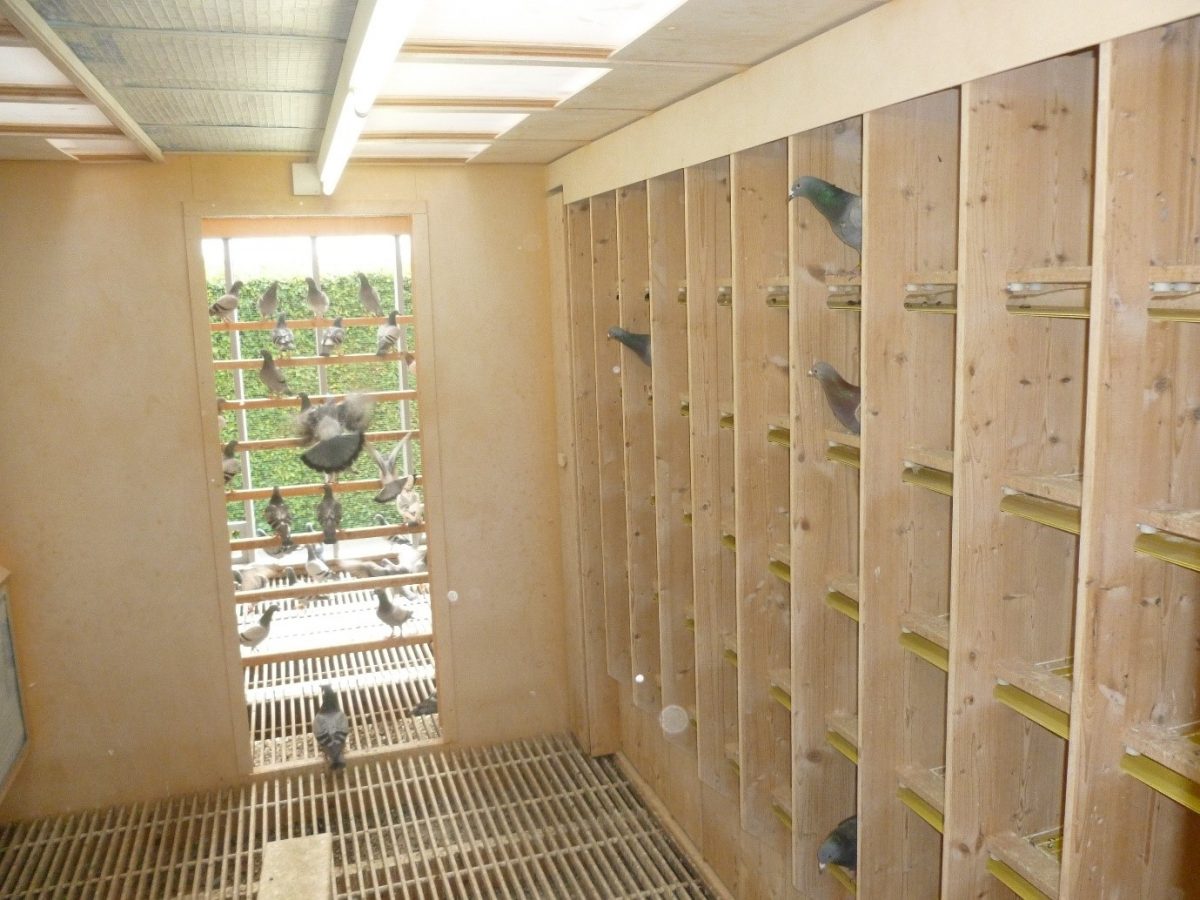 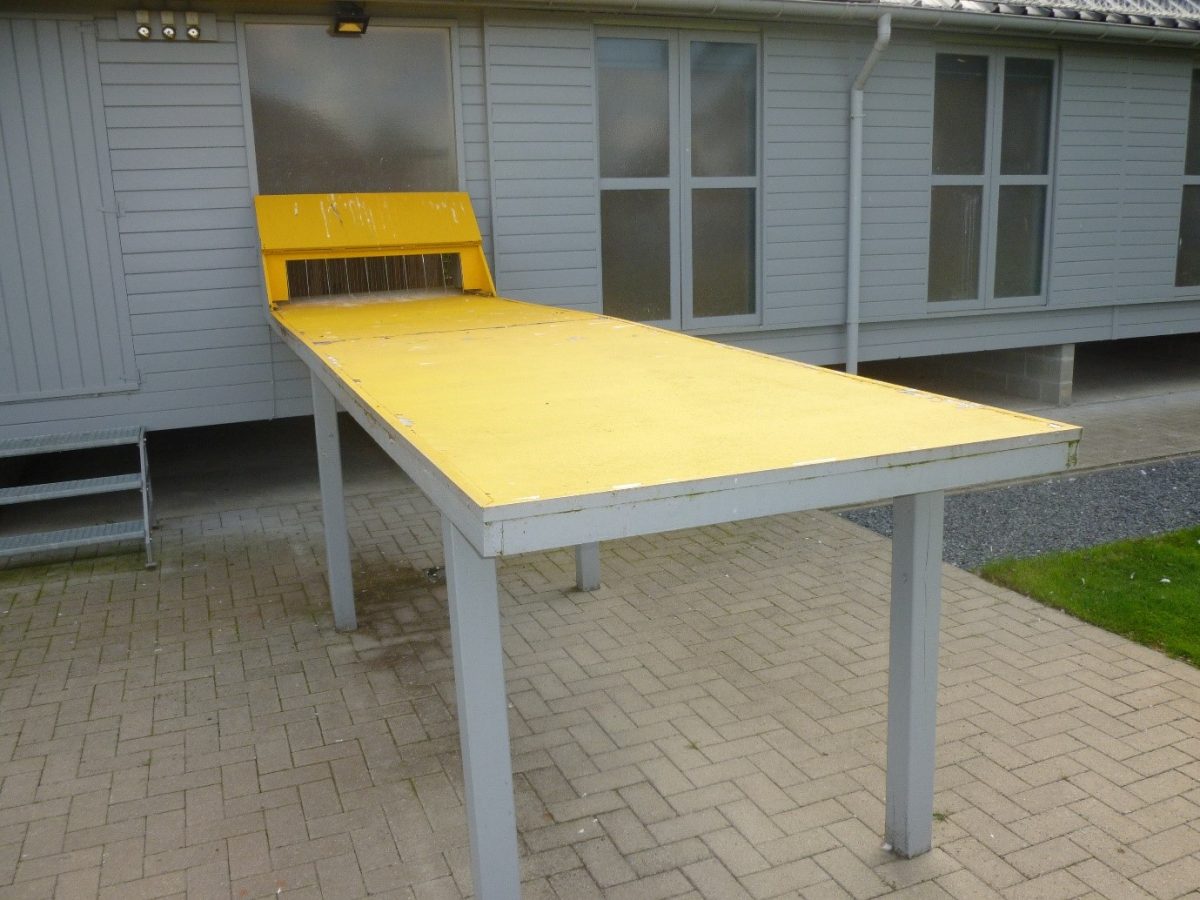 He darkens around March 15th. Bart believes the first-round need darkening for five months, but if they’ve been born earlier, they have natural darkness then. He can then stop these on the darkness system around May 15th. The later bred young birds need around 3.5 months on the system.

When they come off the darkness system the lights are put on until the end of the season.  When the season is over, he turns lights off for two weeks and then puts them back on for eight hours a day. He believes this helps with the moult, after a long hard season they need this.  He has never had a problem getting YB through the moult after the race season.

Training of the YB depends on how well they have been exercising and the weather, but it is normally around May 1st. Training is hard, often with nights in basket before training. They start short and train up to 60 KM. The first races start early June. Once racing starts there is no more road training until the last four weeks. At this time the old birds have been re-paired and need road training as they don’t exercise as well when paired. He takes the YB as well as he is training anyway.

He doesn’t separate his YB, he tried but saw no difference. He does not like them to lay eggs and tries to prevent this where possible. He feeds his YB a breeding mix for a long time, then he changes to 50% breeding and 50% Galaxy light from Beyers. Then he switches to 100% Galaxy light when road training starts. They then race on this mixed with Beyers Energy dependent on the distance.

Old birds are paired in early January and have the same medication program as the stock birds. They are paired in what Bart describes as a “cuddle room” or “motivation room” and they stay together for six weeks. After six weeks they are split, regardless if on eggs, babies etc. They foster the babies off the best birds, this is possible if they are under 12 days old. Yes, he gets feeders to raise 3 YB.

Old birds are fed Moulting mix during moulting and then they get some breeding mix before pairing.  After they are separated, they get 2 weeks of barley, this helps with the down feathers. They then race on Galaxy Light and Galaxy Energy, again, dependent on the race. All birds are fed as much as they want.

The loft design means old birds are separated either side of a “cuddle room” which has all the boxes. The section they are in during the week has perches, poles and an aviary. Before races the cocks and hens may or may not run together, but they are always allowed to be together after the race. The time spent together varies and is dependent on the race. The Old Birds are trained lightly before the race season and then exercised around the loft twice a day. As has been mentioned previously, they re-pair the old birds in August and then they are road trained to keep fitness levels high. 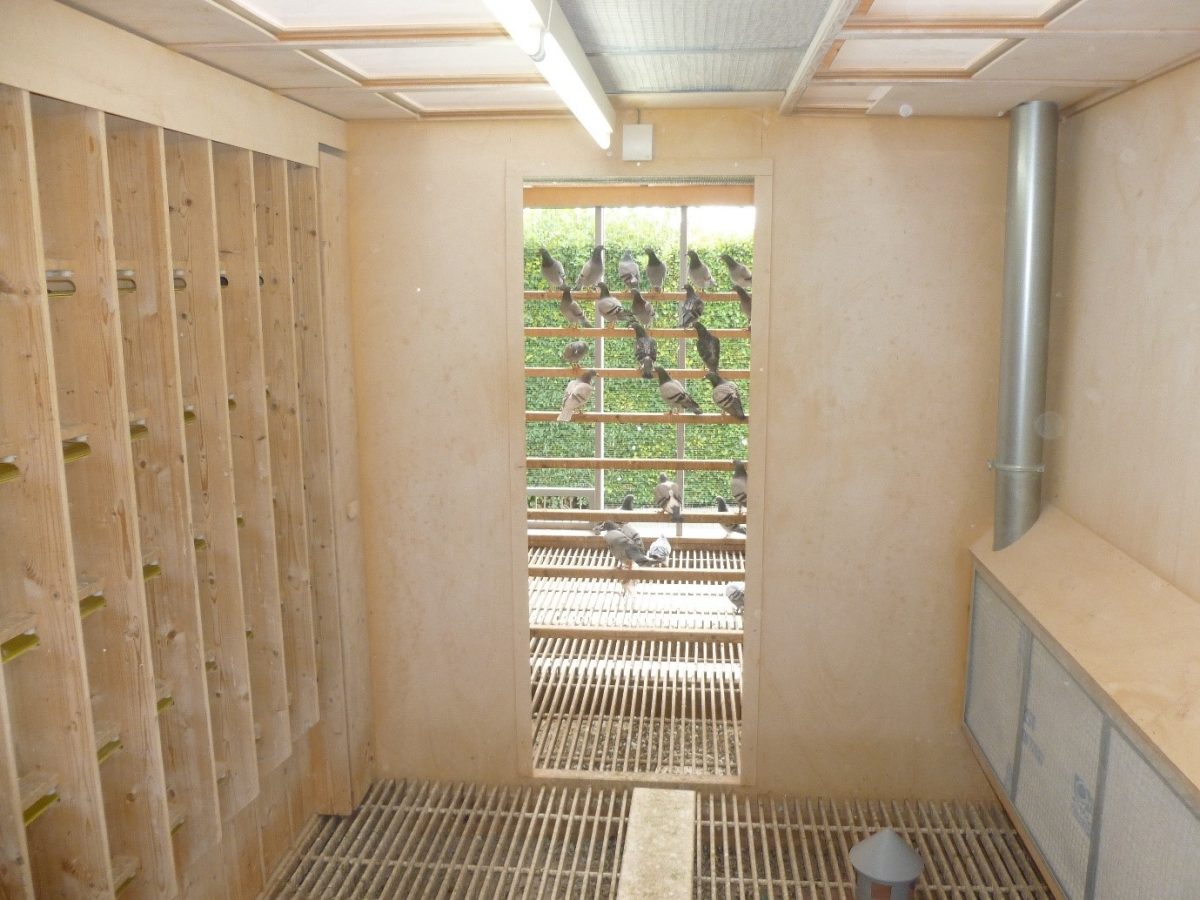 When asked if motivation was important Bart said “good pigeons are important, the rest is theory”
On purchasing new blood Bart and Nancy have one criteria: results, nothing else matters.

Although being a big sender of pigeons, Bart realises that this needs to be managed, not so much in the numbers being sent but in the prizes being awarded. The sport is heading more and more professional and Bart feels it is important that the “club” man is respected as without them the sport cannot survive. The race system in Belgium is different than elsewhere so Bart’s ideas may not apply in other countries. Bart wants to look at sponsorship for races from the big buyers, i.e. the Chinese, where this prize money can be given back in the races as prize money, hopefully helping the “club” fancier in some way.

When you meet Bart and Nancy you are struck how humble and down to earth they both are. They do not proclaim to be the best pigeon fanciers in the world, they just work hard and love what they do, it is infectious and a delight to see.

Their results do all the talking, and no doubt there is much more to come.

One thought on “Diamonds are Forever”