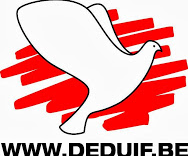 When pigeon sport makes the news, it is mostly about a pigeon that has been sold for a lot of money to a foreign country. In itself very normal. Let’s be honest, the very noble and delightful hobby of collecting Mediterranean salami’s hardly ever appears in the media, nevertheless if there was a chorizo that was going to be sold for 1,250,000 euro then would this be, justly, world news.

Even our world heritage doesn’t escape from this. You never read that the Mona Lisa is still sitting there very mysterious, that Guernica still looks heartbroken or that the sunflowers still look very shiny. You only read something about art when a dazzling amount was bid for a Van Gogh, Magritte or Rembrandt. Hereby I would like to make the exception for the ‘Onvindbare rechters’ from Jan Van Eyck that makes the Flemish news with the regularity of Haley’s Comet.

Are these amounts absurd? Yes and no. Of course, 1 million euro for a pigeon is absurd, 100,000 euro as well, 10,000 euro as well, 1,000 euro as well and even 100 euro in fact as well. For anyone who doesn’t care about this sport every amount higher than what you pay for piece of wild meat at the butcher is quite ridiculous. This reasoning is the same for many things. There are people who think that 500 euro is ridiculous for a pigeon but would gladly pay this amount for a visit to a restaurant, a ticket for a festival or a pair of shoes. Everything depends on the appreciation for something and as long as someone is willing to pay a certain amount for something, it is worth this amount. Is a Picasso worth that much? Or Eden Hazard? Or a Chateau Margaux? Apparently yes.

The classic pessimist will be shouting from the bar that these amounts kill the sport, and that like this nothing is left for the little men. Personally, I think this total nonsense. Let’s be honest, what is the difference between a pigeon that is being sold for 10,000, 100,000 or 1,000,000 euro? I think this is above the budget of the average Belgian or Dutch fancier anyway. It is a bit like complaining that the newest Rolls Royce will cost the double of his predecessor and we would have bought it at the old price. We’re talking here about top breeders, top racing pigeons that aren’t within the reach of the average breeder anymore for quite a while now. You can be very ambitious as chairman of the football club ‘Hogerop Testelt’, but you do realize that Ronaldo will never sign a contract in your team. Or he has to be 85 by then, walking on crutches, being blind, and even then?

Is this bad? No, everybody plays at his level and there are more ways to enjoy sport then just winning. Abramovich is very unhappy, and his lobster with caviar tastes worse every year that Chelsea doesn’t succeed in winning the Champions League. The chairman from ‘Hogerop Testelt’ might feel like the king of France when he sees on a Thursday evening his youth team training, hitting the ball, enjoying the game…And imagine how proud that chairman will be if one of the youth players made the Red Devils’ team in about 10 years. Somewhere in the world there is someone who can say that Messi’s first football outfit was one of his club.

It is also a fact that these amounts will do good to the sport in the end. When Paris Saint-Germain puts 222 million euro on the table for Neymar Junior, then this is a lot of money. Without a doubt this money will not do any harm to the brokers, whether or not dishonest, intermediaries. But a part of this huge amount of money will do good to the football. Barcelona might buy a player from Arsenal, who will then in their turn buy a player from Club Brugge that was being scouted a few years before on the youth tournament from ‘Hogerop Testelt’.

One day a phone was a device that everybody had in their house, no one knew how much it cost and which you could only use to make a phone call. Now it is a multimedia library with 1,000 functions, which costs 1,000 euro and even fits in your pocket. I mean, times are changing as the prices and the importance of certain items. Numbers, whether it is the height, the weight or price of something, are always relative. What is too much, too far or too heavy for one, might not be for another. For me biking to the supermarket which is in a village 5 km away is a huge thing, while Greg Van Avermaet’s training only starts after 5km. French fries with a steak, a drink and dessert for 9,99€ is ridiculously low for me while this is way above budget for a huge part of the world population. Everything is relative and everything has to be taken with a pinch of salt. The most expensive pigeons are like the world boxing champions. At the contrary what the name seems to tell you there are many walking (in this case flying) around like this.

Isn’t there anything negative to say about these big amounts? Sure there is! The biggest football philosopher J. Cruyff once said, every disadvantage has its advantage. This last means that the opposite is true as well, every advantage has its disadvantage. Money has the habit of bringing out the worst in people. Some people will go miles for money. People lie for money, brag about money, people even make themselves foolish for money. Did you think that Jean-Marie Pfaff found the ads on his collar fashionable? In the worst case possible, the power of money can lead to corruption and cheating. Even though we have to put this last one in perspective. Every time I play a game of cards with Lance Armstrong, I don’t trust him. He has without a doubt some aces hidden in his socks, a cheater cheats, whether it is in the Tour de France or paying for a round at the bar. A long time before there was any form of currency our ancestors would have been cheating in slinging rocks, mammoth racing or throwing the sabre tooth tiger. Mrs Caveman will have been jealous as well at the neighbours when they had a bigger cave with nicer drawings. Cheating, being jealous, being vain, money didn’t invent these characteristics, people did. One has it a bit more than the other and is a bit lame in blaming money here.

So be as a pigeon fancier happy that your sport makes the news in this way. I don’t know if you follow other newspapers or media, but there are worse way to make the news. Football players are nowadays at the same page as the actors from The bold and the beautiful, and when they are talking about cycling people nowadays think first about pharmaceutical highlights before heroic achievements. Be happy that the money is going around in your hobby and not for example in collecting Spanish salami’s. But especially, don’t think about it too much and enjoy your hobby, and you might have the new Messi on your loft.

Having said all the above, I must admit then when I heard what was the offered amount on a pigeon, I was also ‘verschoot’ (‘Verschoot’, the last name of Joel Verschoot means ‘startled’ in Dutch)
Mike
Source: Sportblad De Duif