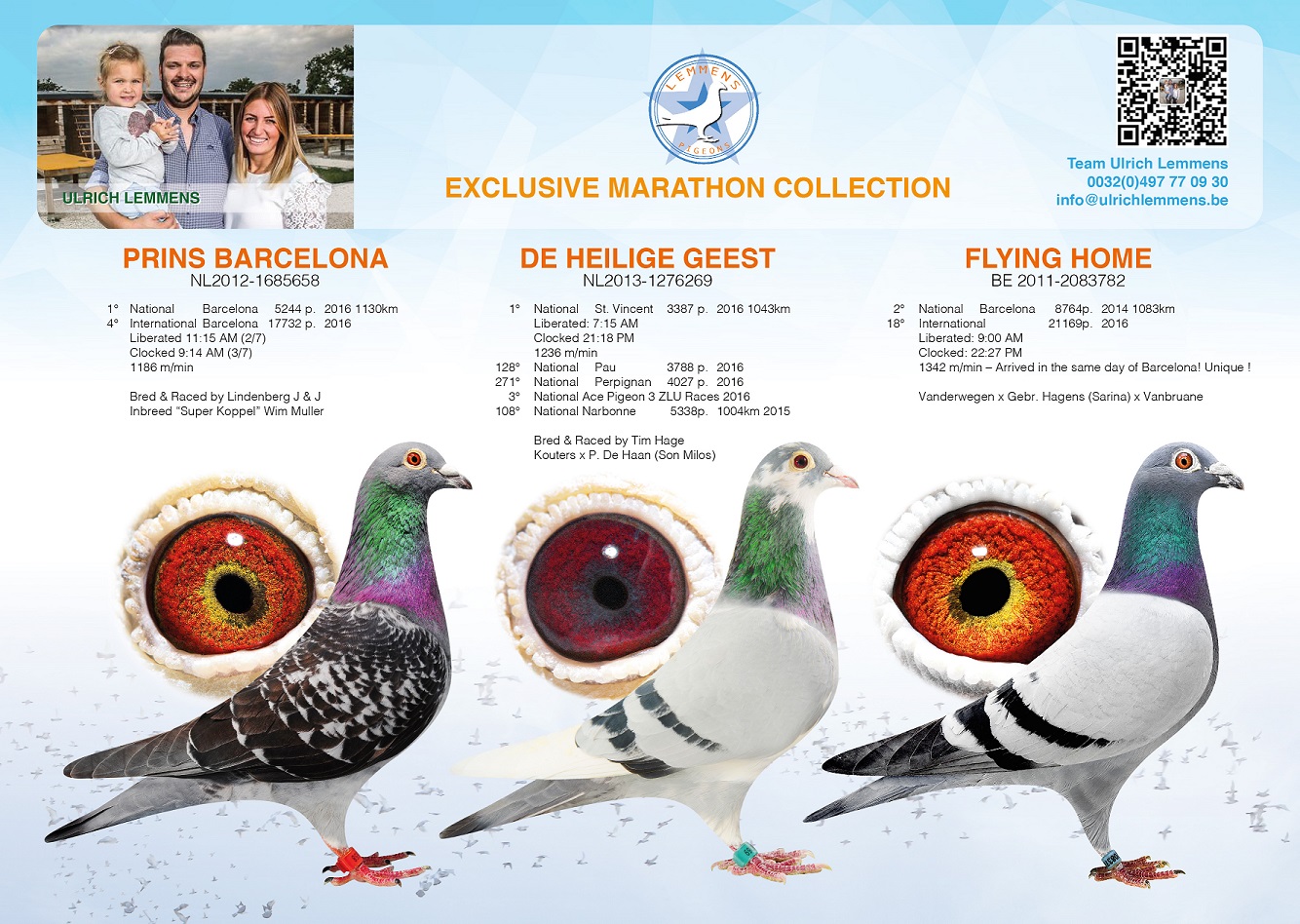 Ulrich, here we are again!   Your Q & A was one of the most read on our website, so time for a sequel.

We heard you’re building a “Barcelona-Team”, what can you tell us about that?

Well informed … Together with my best friend Laurent Hild (France) we started talking about competing in Barcelona, for me it looked like fun to be outside my comfort zone and have a new goal. So Laurent and I agreed to make a partnership and pursue our Barcelona dream.

So how did you get started?

At my new property there was room enough, so we had the loft, only we needed the birds and the system.  So we started looking for exceptional pigeons to build up our foundation and while buying, we also asked the “secrets” and the system.

With which bloodlines did you get started?

I’m not sold on bloodlines, I don’t care about pedigrees, I only care about performance.  We looked for what we tought where the greatest birds out there. I’m alergic to pigeons with a pedigree where the parents and grandparents never been in a basket.

First bird we bought was the Barcelona winner 2016 of the Netherlands. An exceptional bird, who won with a 1 hour and 15 minute lead in the country.  While all the top birds where located on the east side, he clocked on the coastline, which was for us an amazing performance. (“Prins Barcelona” is on father side inbred to the “Super Pair” of Wim Muller, 1° Nat. Winner Barcelona 2017)

Than we also bought one of the most unique birds Holland ever had in “De Heilige Geest” (The Holy Spirit). This bird didn’t only win 1° National St. Vincent but was also 3° National Ace Pigeon Marathon of the whole of Holland. A unique combination that rarely comes by. Also the perfect all round bird, with top prizes on sprint and middle distance as well. (“De Heilige Geest” is a grandson of “Milos” of Verweij-De Haan, a very popular and dominant bloodline at the moment).

Another top bird is “Flying Home”, one of the two only birds in history of Barcelona to arrive on the day home. He was found 10:27PM on the loft, just sitting there. The family of this bird is also known for its “night flyer” abilities.

These birds should cover any cirucumstance we can hit on a Barcelona edition and should make it possible to create our own Barcelona bloodline in the future.  Above listed birds we’re crossing with the best of Stijn & Jeroen Rans (1° International Barcelona 2019), Kristof Mortelmans (1° Nat. Ace Marathon) and some children of national winners on Barcelona.

My first thought is … a lot of birds from the Netherlands …

You’re exactly right, first of all we live in the north of Belgium, so basically 90% of the country has a shorter distance than us. So compared to that it makes sense to buy birds that have proven to be able to do that distance. Second, Holland just dominates the international racing. They clock birds, when Belgians can’t. They clock in the middle of the night, early morning, doesn’t matter what, they clock.  Also the same races, close so much faster in Holland than Belgium, for me the signs of better quality.

Why you think there is better quality?

Very simple: selection.  Pigeonsport is a selection sport and you’re only as good as your selection.
Holland has a fantastic racing shedule for marathon flyers, they have the 7 ZLU (international) races and on top of that, they have midday liberations on different distances, where pigeons can learn a lot. Plus they are allowed to basket yearlings on Perpignan. And there have a much higher number of birds. Belgians are also more soft on there birds, they often only starting to give them distance as 2 or 3 year old. In Holland they are already selected then.

What system are you going to use?

In general my idea was that most successful racers basket their birds on 10 days eggs. I never ever flew on a nest, so I must say it was a BIG challenge.  In combination of my other birds it was also the easy way. But I don’t know what I’m going to do in the future, I’m not totally convinced of the need of that particular system. I think it’s very difficult to train birds that are on a nest, plus I have totally no clue if they are on top condition or not. A bird on nest always looks great, training was hard. I’ve a lot of questions my self.

How big is your current team?
We are off on a rough start. The first year, we didn’t think about quantity, only quality. Plus to be honest, when you buy such birds, they come with a serious pricetag, so we also had to sell a few to recoup some money. Than the hawk ate almost all of our birds, so nothing left there. Then last year we had a team of 40 yearlings to go and compete and for 2020 we’ll have total team of 50-60 depending the selection I’m going to do.

What did they fly?

The youngsters fly the late tour in September/October, these are +- 10 races of 50-150km in a very short time.  Not the perfect learning school, but in my situation the best I can do. The 2018 birds flew last year “Agen” + “Narbonne”, so two international races.

How did those first two international races go?
Terrible … just terrible … The week of basketing Agen, our birds got lice on their chests who eat away the feathers.  No influenza, different vets said, so we decided to basket them, in my opinion on a good condition.  Race day started fantastic, with two cocks arriving close to each other, the first two prizes in the club and also on national level in the top. I was soooo excited about it… What a start, I thought.  But with 48 birds in the race, it was only the start of one of my biggest disappointments in my life.  In the province we only scored 12/48 with only 2 top prizes and all the rest came on the last page.  Just TERRIBLE …

I tried to figure things out, what went wrong. Of course it was a super hard race in extreme circumstances (heat and east winds).  I never give up, winning is not everything, it’s the ONLY THING! So we pulled our act together and worked our ass of for the race of Narbonne.  We send 31 warriors to this 905km race. Again they hit extreme circumstances. When looked on the arrivals on PIPA, we already knew there weren’t going to be day birds on our side of the country.  With around 20 people waiting for the birds, it almost got dark.  But then it happened – 227 arrived – a moment of real goosebumps, because of the crowd reaction, we didn’t get her immediately in, but she still managed to win 1st prize in the club (1 hour lead) and an unbelievable 4th place in the province of Antwerp. But, again, the same frustrations as on Agen; if we would have clocked a few birds the next morning we had a super result, but that didn’t happen at all.  Only 3/31 birds won a prize in the province … a big disgrace.  And the worst part is, I have no clue what I did wrong. The only thing we saw is that we lost all our cocks. The hens we had 8 home the next day. They were flew on a nest, so same position, same food, same supplements …

So what are you changing for 2020?
The combination of my normal races and marathon on top of that is almost impossible.  I would love to give them more experience as a young bird so for 2020 we changed the marathon sections in the loft, we have 4 sections now, different system, we’ll see how that works. I’ll probably try the nest one more time.  Normally everything goes to Agen + Narbonne, but at this moment we don’t know our racing schedule yet.  I heard the rumour we would get a St. Vincent for yearlings.  If that’s the case, the yearlings will fly that one and the 2 year old maybe already go to Barcelona becase we need a big and tough selection for 2021.

Laurent Hild and I just bought a house with racing lofts 1 mile from my current property.  This location we’ll only use for the marathon. This way, we can train them better as young birds, have different systems and sections and we can have a bigger quantity. So the 2020 youngsters will all be weaned on this new location, starting April, and the old birds that survive our 2020 racing schedule we will try to relocate to the new lofts, which should be possible. It’s only 500 meters in air.

Do you regret starting this project?

I’ll first answer the “no-part”.
I think it’s one of the most amazing feelings to clock a bird off a distance on Barcelona in the top. It’s so much hard work and then it pays off. Don’t forget you only have one shot a year; a middle distance flyer, when he loses, he has a new chance next week.  A Barcelona flyer has to be patient ALL YEAR to have a new shot.  And I ultimately want to create a bird that can win on every distance so Barcelona is a very important part of that process.

My biggest regret is the racing shedule. I have a Barcelona-Dream but in the mean while I had the idea to compete in all 7 international races.  To have some more fun … But after competing in two races already and analysing the past years, I came to the conclusion that there is nothing more dishonest as all these races.  Most of the time the organisers (the races are not organised by our federation KBDB) always find a way to either delay the race or have a later liberation time than planned.  In 90% of the cases these decisions are in benefit of the west part of Belgium. Leaving the longer distances and Netherlands without any chance to win. For me that is really hard to swallow, because you work so hard and already before liberation you know you have no chance to win.
That’s why I like Barcelona the most, they never make it home on the same day, so there is a fair chance for everybody. For me minimum there should be an east/wester International result. Or maybe just need different people in charge of those races. If they are all overnight races, there is no more discussion. I know it’s impossible to make everybody happy, but at least you can try to make as many people as possible happy. Instead of one looking after yourself and your own region.

What are your expectations for 2020?
It will be a hard year, having to drive up and down to the new marathon loft to train the ybs.
And for sure the results with the old birds mus be better than last year. The top prizes where there, but than they need to keep coming. We have also invest again in our breeding loft, adding a brother and daughter of 1° International Barcelona of Rans. We have a special collection now of them, I’m very confident in these birds. I really believe we have a strong foundation, a combination of special winners crossed with children/sisters of the absolute top champion of the marathon sport.
Now it’s up to me, to try to be as good of a manager I can be. It’s all in my hands.