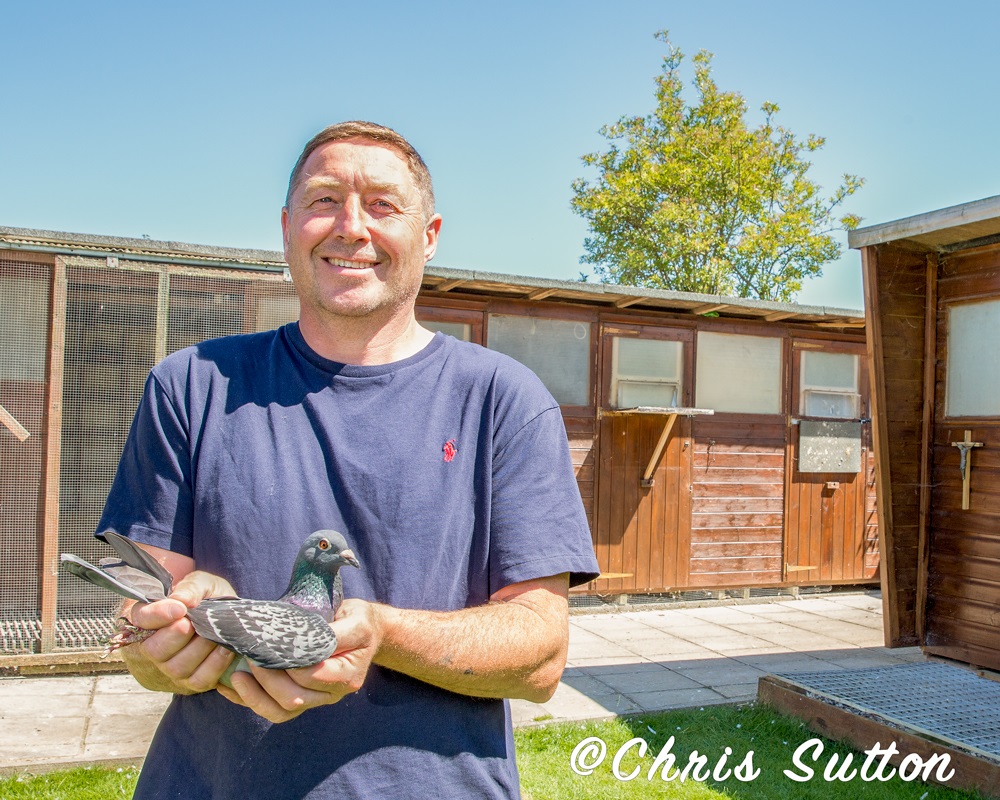 Barcelona is the Blue Ribbon race for the British International Championship Club as it is the longest race for all members. It is run in conjunction with the Barcelona International and this year 16000b were liberated on the 5th July at 8:50am UK time and John Chipperfield recorded the arrival of one of his four entries at 6:32am on the third day to record a velocity of 604 ypm over a distance of 688 miles.
John Chipperfield lives in Herne Bay, a seaside town on the north coast of Kent and including the Barcelona race, he has won five BICC races with four being from the International racepoints and one BICC National race. His main aim was to time in from Barcelona “I just wanted to know what it felt like to get one” he said, which he has done this season in style. His winning hen is small in comparison to most pigeons these days, but she had previously proved her heart is as big as any, being 15th Open BICC from Pau at 560 miles, 15th Open BICC from Perpignan at 610 miles, and now 1st open from Barcelona 688 miles.
Preseason his friends were advising him to send her to Pau International again this season to be followed up by St Vincent International 544 miles, but John would not be swayed in his decision to send her to the biggest race in the International programme, as he knew if he wanted to get one, he had to send his best and she came just under 5 and a half hours clear of the second pigeon on the BICC Open result.
Now named “Herne Bay Sophie” after the daughter of his friend Robbie Harris in Ramsgate, as she was gifted to John by Robbie. The sire in turn was gifted to Robbie by Alan Phillips of “Channel Lofts” based on the island of Guernsey. A fox had entered into the stock loft of Robbie and taken all his stock pigeons in 2013 and Alan kindly offered him 6 youngsters, one of which is the sire of “Herne Bay Sophie”. He in turn is bred from “Tammy” full brother of 1st Open BICC St Vincent 2014, 12th Open BICC Pau and half brother of 1st and 6th Open BICC Pau. He was paired to “Darkie” a hen direct from Mark Gilbert being a half sister to G & C Cooper’s “Scotty” three times 1st West Section. “Darkie” was sired by a son of 1st International Bordeaux when paired to a daughter of “Euro Diamond” and her dam “El Mark” is a direct daughter of “Southfield Supreme” 1st International Dax and dam of “Scotty”. The dam of “Herne Bay Sophie” is a hen owned by Robbie Harris direct from the loft of E. Verheijen in Putten. Her sire is a son of “De Stien” raced by Martijn De Groot and was the 2nd best long distance North Holland in 2008 and her dam, bred by E Verheyen, is down from “Int Barcelonaduif”
She was raced on the roundabout system after being paired at the end of February and allowed to rear two youngsters. One of which was allowed to go to another fancier and the other retained at the Herne Bay lofts. Once the youngsters were 14 days old the hens were taken away to their racing compartment and the cocks left to complete the rearing alone. She was sent to a couple of inland races then Messac before the Barcelona race and although John would normally recouple the pigeons in preparation for the main event, the hens were flying so well he decided to leave them on widowhood. Daily exercise proved they were fit as they would be very high in the sky and range for an hour and a half or more.
During the season all the pigeons are fed on Marimans Variamax, which contains 32 different seeds, and for six weeks during the long distance races, Matador Turbo Energy is added to the daily feed. As the cocks are fed individually in their nest boxes, John can prepare each one as required for racing but the hens being communally fed need a little more consideration if they are getting too much fats. John decided to give them a super diet mixture for a few day to keep them flying well with the fat mixture added just a few days before going to Barcelona. He said, “if they are not exercising right they will not have a chance” and too much fats can affect their exercise so he keeps a very careful eye on the hens.
When his hen arrived from Barcelona, he was having a little “eye rest” as he called it, he had been waiting the evening before right up to night fall and up at 4:30am the next day to begin the wait once again. After an hour or so he had made himself a coffee and just thought he would close his eyes for a moment and “thud” he heard her hitting the landing board. He ran to the ETS for confirmation, timed both verification rubbers into his manual clock, and called his time into Carol the BICC Secretary. He then realised he was stunned, he did not know what to do with himself, “It was the best excitement ever” he said. The phone rang and it was his friend Johnny Black, “have you seen the website?” he asked, John told him he dare not look and did not want to, because at that moment he had won the BICC Barcelona race but there were other very good pigeon fanciers to beat him. Four hours later John Black called again and said, “There is nothing else in yet, you have won it!”. It was not until Mark Gilbert called to congratulate him that it sank in, he had achieved his goal of not only experiencing the timing of a Barcelona pigeon, he had actually won the BICC Blue Ribbon event.
Any news or views to me Chris Sutton on 01530 242548 or 07792 356330 biccpressofficer@gmail.com