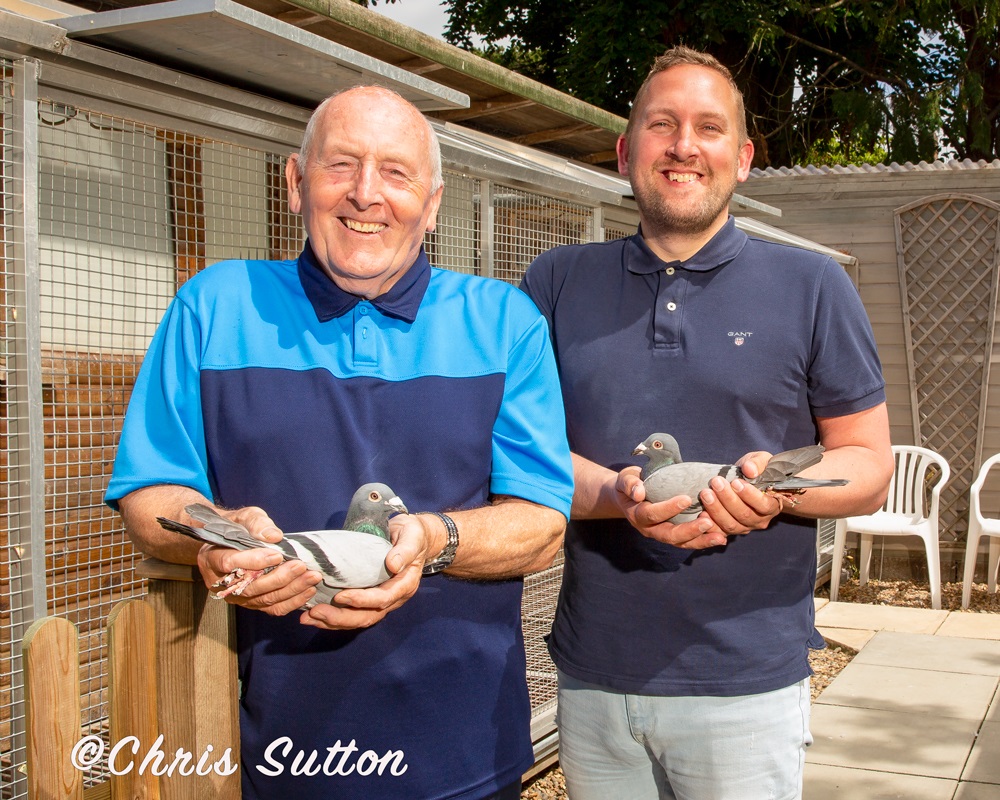 The third race of the season for the British International Championship Club was held from Cholet on the 25th May and was won by Bob Besant and son Anthony flying just under 300 miles.
From the lofty heights of their 1st Open International Agen in 2015 with “Noble Dream” the partnership have gone on to make some outstanding performances in the NFC Tarbes Grand National winning their section twice, timing on the day at 10:09pm and the other very early the next morning at 5:03am winning the “Shy Lass” trophy two years running for the best performance over 450 miles for 2016 and 2017 from Tarbes.
They obviously made some very carefully considered selection for birds that will perform at the longer distances but they felt that early National races were being relegated to training tosses for the main events later in the season. So they decided to look for a few Sprint/Middle distance birds in order to compete with confidence whilst still sending the distance birds for a training spin.
Their search for quality birds led them to Clive Lister and his Gaby Vandenabeele based birds
where they obtained twelve youngsters to race. Right from the off they became more competitive in the shorter races and began to enjoy their Saturday afternoons more often. It is great to achieve a top performance in the longest races but they felt they were putting a year round effort for just one month of rewards.
Bob and his brother built a huge reputation in the in the past with the sprint and middle distances races and having won the NFC from Guernsey, he certainly knows how to get the best out of birds bred for this job. Anthony joined as partner with his Dad and won NFC Bordeaux in 1991, sold up in 1994 before restarting in 2009 where they went on to win the 1st International from Agen and now they can add yet another BICC win from Cholet.
They normally just let the long distance birds race themselves fit in the early races but now with the introduction of the Vandenabeele pigeons they train regularly pre season from fifteen miles with the result that the birds finish better and race right to the trap. They are enjoying the whole season now, knowing they are competitive in the shorter races and not too concerned if the long distance birds are a little slower paced.
They race both cocks and hens and indeed had two come together the take 1st and 2nd open from Cholet and Bob would commented that although it may take three years for a long distance line to come to fruition, the sprint to middle distance birds begin to perform right away “It only takes a year to be competitive enough to win the National” he said and they have certainly done that with style, it was a good racing day with a NNW wind ensuring an honest pigeon would come to the fore. The Vandenabeele pigeons have proven time and again to suit those conditions racing up to 400 miles, so it was a wise decision for Bob and Anthony to visit Clive Lister following the advice given by Mark Gilbert to keep a few faster birds, just enough to brighten the early season results.
Bobs wife told me the tears flowed when they learned of their win which is understandable as this Father & Son partnership put so much effort into every aspect of their sport. The lofts have been equipped with a full frontal aviary since my last visit which allows safe access to sun and air when the birds are relaxing in the bath etc. I am in no doubt they will clock yet more high positions when the longer races come around, and fully expect to make yet another visit to their loft.
Steve Appleby sent me his usual in depth weather report on the race as follows; The B.I.C.C convoy at Cholet were released at 06:45 into a liberation sky. Early on conditions were very good but soon after liberation cloud did generate quite quickly over the race route to northern France. As the morning progressed almost as quickly the cloud had developed it dissipated improving the flight path. The satellite imagery received identified almost total blue skies over the channel and the Cherbourg Peninsula. The Channel was clear with visibility 25 miles plus. The view looking out to sea from the camera positioned at Jullouville (see image) on the Cherbourg Peninsula suports the good visibility an essential component for pigeons to navigate. The pigeons on leaving the race point faced a light NNW wind through France which changed to a north westerly direction over the open sea. Organisations racing inland from west to east were recording velocities in excess of 1600 ypm reflecting the west in the wind. Over southern England and the Midlands weather conditions were first class all day, but later rain bearing clouds cascaded down from Scotland arriving over the north Midlands by late afternoon.
If you won a position in the top three of your section, could you please send details of your pigeon, along with your photo if possible, by email at [email protected] or call Chris Sutton on 01530 242548. This your platform for the publicity you deserve, so please help by making contact within 5 days of the race.