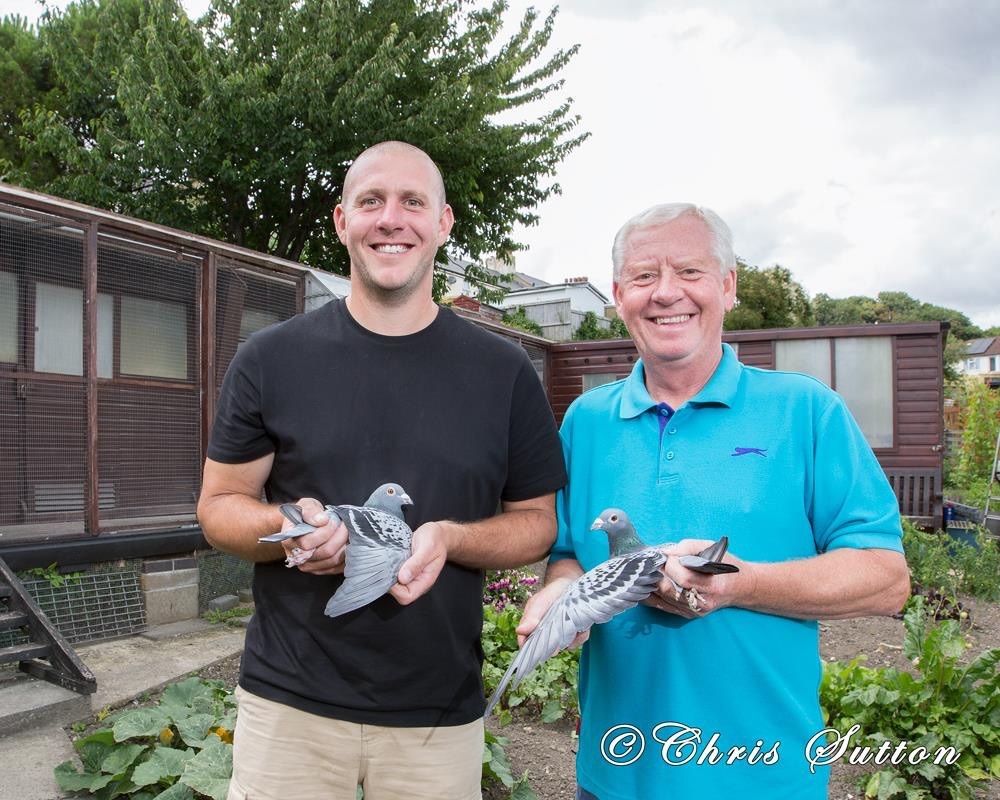 The fifth International race of the British International Championship Club program was held on the 19th July from Marseille and were liberated along with 10029 pigeons at 5:35am UK time with them all heading home to five different European countries. It takes a special kind of pigeon to race over 573 miles and fly over the sea in the last stages of the competition. Even more special are those pigeons that consistently repeat these performances and the winners Lee and Kevin Buddle, the Father and Son partnership from Dover, had also won Marseille the previous year.
In 2018 their pigeon “Oasis” GB12N14831 won the British Barcelona Championship Club from Marseille and in 2019 she came third. Their winner for 2019 from Marseille “Ronald” GB14N16574 was placed sixth in the 2018 Marseille race, so I asked Lee and his father Kevin to list all the details of both these fantastic long distance birds; “Our first pigeon in the clock is a 5 year old cock we call “Ronald”, named after my late grandfather & Dads Father. After being paired in early February and raising a pair of babies’, his hen was taken away after sitting between 5-8 days on their second round. He has then been flown all season on our Widowhood/Roundabout type of system, where the cocks and hens only get to see each other to run freely for an hour or two on return from the training races with the BICC, BBC, EECC & Local Club. They are only put together before race marking when it comes to the International races. Feeding here is very simple with every pigeon getting the same mix every feed seven days a week and is made up of 50% Versele-Laga Superstar Plus mixed with 50% Vanrobaeys Best Allrounder and a few fatty seeds given the last five days before marking. In preparation for Marseille he flew some BICC & BBC short national races before going to BICC Pau International 4 weeks ago where he was our 2nd pigeon in the clock winning 75th Open. The Sire of “Ronald” is a Grandson of G & C Coopers PD & JW which we brought from F Birch & Sons. The Dam of is a Granddaughter of Mark Gilbert’s “Southfield Supreme”. “Ronald” has been a very reliable race bird and has now won himself and our 8th BICC Certificate Merit Award with the following prizes won. 1st BICC Marseille 2019, 6th BICC Marseille 2018, 13th BICC Perpignan 2017, 29th BICC Pau 2018, 35th BICC St Vincent 2017, 39th BICC Perpignan 2016, 50th BICC Mont De Marsan, 75th BICC Pau 2019.
Our second pigeon in the clock being 3rd Open Marseille is the previous winner of this BICC Race last year, a 7 year old hen we call “Oasis”, and she had exactly the same preparation as “Ronald” except she was our first bird in the clock from BICC Pau 4 weeks ago winning 71st Open. She has already won herself a BICC certificate of merit award last year with the following positions. 1st BICC Marseille 2018, 3rd Open BICC Marseille 2019, 2nd GDSB St Vincent 2016, 10th BICC St Vincent 2016, 15th BICC Perpignan 2015, 17th BICC St Vincent 2015, 31st BICC St Vincent 2017, 35th BICC Pau 2016, 54th BICC Mont De Marsan 2017, 57th BICC Pau 2018, 149th Open NFC Tarbes, 71st BICC Pau 2019. Oasis is a direct daughter of “Amoy” 1st Open BICC Pau 2009 & BC 2nd Open BICC Pau 2009. “Oasis” is also a full sister to their top race cock “Tom”, winner of 5th BICC St Vincent 531m 2013, 6th BICC Perpignan 598m 2016, 10th BICC Pau 545m 2016, 15th BICC Pau 545m 2014, 22nd BICC St Vincent 531m 2014, 27th BICC St Vincent 531m 2015, 30th BICC Pau (on the day) 545m 2013 and a BICC Certificate of Merit Award winner. “Tom” is also the grandfather of H & P Archibald’s super NFC Tarbes Hen “The Proof” winner of 1st Sec, 2nd Open NFC Tarbes 2018 & 1st Sec, 3rd Open NFC Tarbes 2017. Our 3rd pigeon in the clock and 17th Open is a five year old cock that is a full brother to “Elsa” 1st Open BICC Narbonne for us in 2014 flying 557 miles. This cock also flew BICC Pau 4 weeks ago winning 87th Open”.
Truly outstanding results, achieved by a small family of long distance pigeons, carefully blended together by this Father and Son partnership who are determined to compete against the best in Europe, in the very testing International race program with the added task of flying over the sea, plus flying 672 miles from Barcelona, they won the British Barcelona Club and placed third in the British International Championship Club 2019.
News and Views to me Chris Sutton on 01530 242548 or 07792 356330 email [email protected]