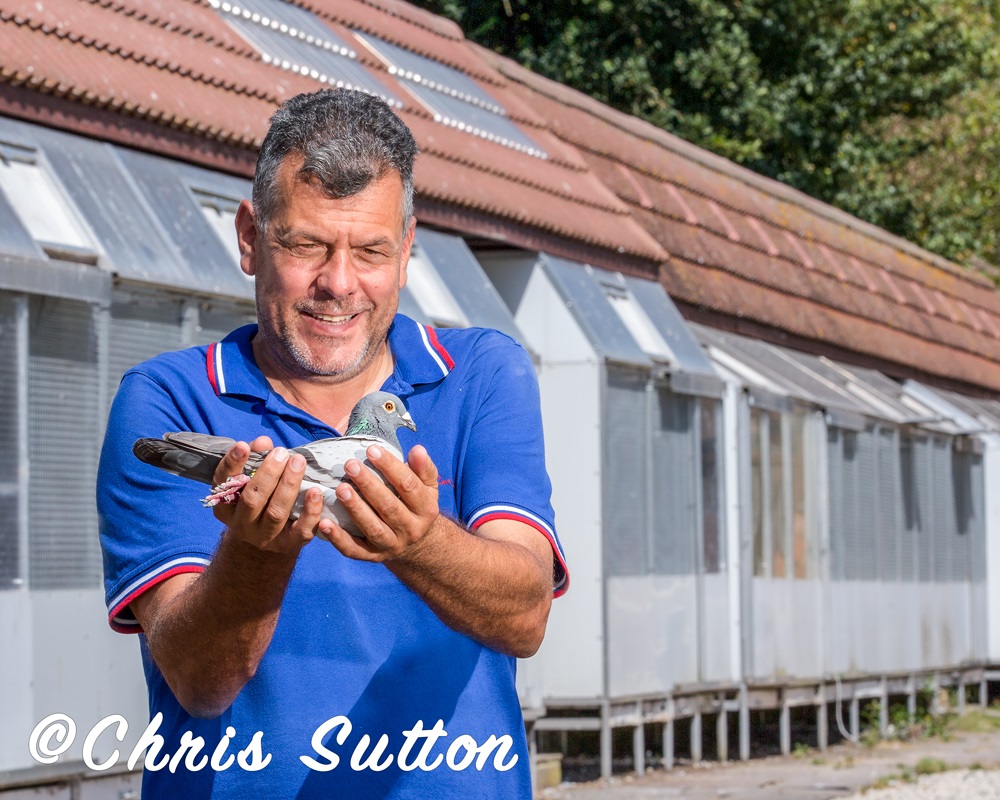 The fourth race of the seven International race series with the British International Championship Club was held from St Vincent on the 13th July. The 10597 International birds were liberated at 6:15am UK time into a northerly wind, after a one day holdover due to rain in Belgium, Germany and Holland. Although birds were timed on the day into Northern France the BICC winner was not far away from home at nightfall, after having to cross the English Channel as the daylight was fading.
Mark Gilbert was hopeful of a bird on the day although, the northerly wind was against the pigeons over most of the 539 miles, (868km) his entries had to fly to their home. He was not far wrong to expect a day bird as very early the next morning, at 5am, “Southfield Darren” dropped onto the landing board, just as it was getting light, proving he must have been very close to making it on the day of the release.
He is bred from a son of “New Laureatt” 1st International Barcelona, when paired to a daughter of “Kanibaal Barcelona” 4th International Barcelona and 26th Open Perpignan. His granddam on the sires side is “Olympic Romee” a super racer for Jelle Jellema being 1st Olympiad Marathon in Budapest 2015, 1st international Marathon Europa Cup and 1st National Ace pigeon BOTB 2013. The granddam on his mother’s side is a daughter of “New Laureaat” 1st International Barcelona.
Mark had named his 1st Open BICC St Vincent winner a few weeks previously when he then flew 562 miles (778km) from Pau, on the day, with two other loft mates to be 1st, 2nd and 3rd Open BICC and 4th, 5th and 7th International. As well documented, Mark went on to record the greatest ever performance in the BICC from Pau, winning the first eight positions and having 39 birds on the National result of 129 birds recorded home in race time.
The first seven of those went back to St Vincent with the others earmarked for the next few International races from Marseille, Narbonne and Perpignan over the coming weeks.
Mark does keep a large team by most standards, but they are extensively tested, going to continental races many times in the season in order to aid his selection for the International races which is his main aim. “I want to put the UK on the world stage” he said “we are as good as the continental fanciers and we can beat them, even though we have the seas to cross”
He is certainly putting himself on the world stage, having put up some fantastic performances with birds he has carefully prepared to be at the peak of their abilities over long distances. But he also has his setbacks, like we all do, and he does not faulter in his endeavour. However much it hurts to have a poor race by his standards, he knows that by putting the UK on the world stage, he has put himself under the spotlight first and foremost. That self inflicted pressure would destroy the will of some fanciers, and I have heard him say “why do I do this to myself” when he was waiting for pigeons he considered should have been home, but it will not stop Mark, he will not be happy until he has won the Barcelona International, flying into the UK and being honest, there is nothing left for him to achieve after that. Hopefully it will come!