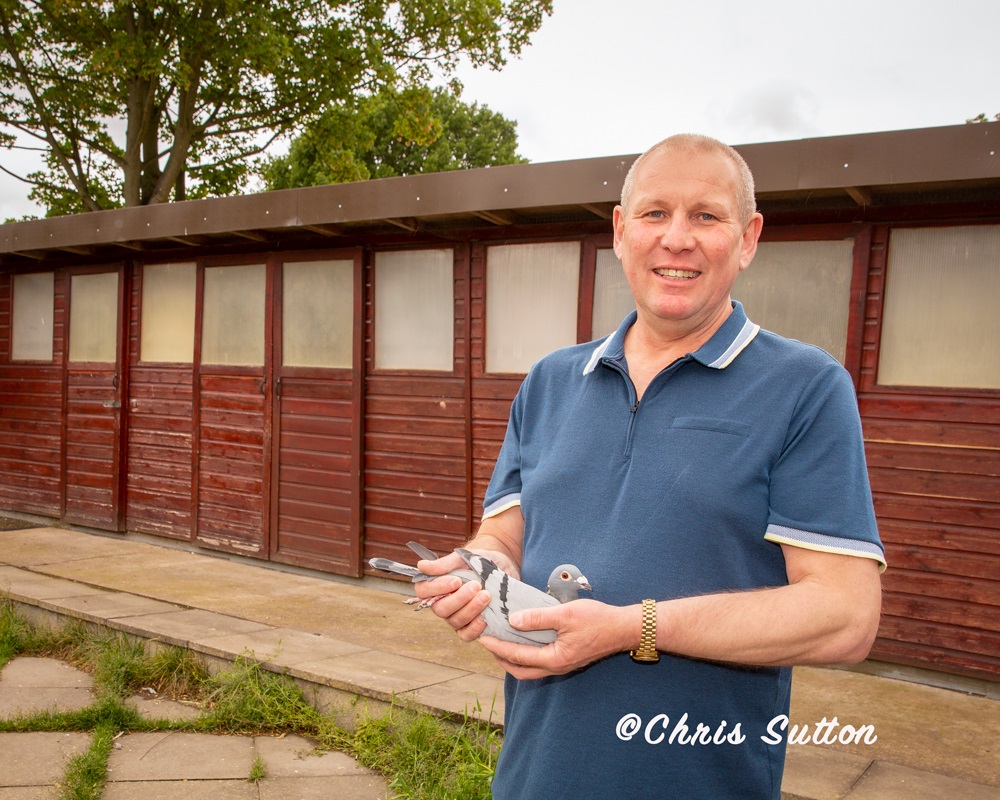 The second race of the season for the Midlands National Flying Club from Fougeres took place after a one day holdover on the 9th June 2019. There were 429 members that entered 4128 birds into the race, kindly sponsored by Countrywide Corn Supplies. It got underway at 7:20am with little or no wind, high broken cloud with the sun breaking through. The forecast showed some very light north east winds up to the French coast, then turning south west through the channel and throughout the UK mainland.
The overall winner was the top west midland fancier Gary Downing, racing to his back garden loft in Smethwick. His performances inland have been outstanding, especially with young birds, in Club, Federation and Open competitions in the UK hotbed of sprint racing. He has of course been very high up in the Midlands National Flying Club results before, in fact I think he was second on one occasion, but to win it outright has really given him a buzz. I was really keen to visit Gary, having watched his results over the years and of course the outstanding Van Roebays Gold Ring Classic successes with young birds.
As expected, I was given a very warm welcome and found Gary to be a very humble pigeon man. He is an “A Type” person in his approach to racing and practices a system in which he can gain the best out of his hens. He had decided to concentrate solely on his hens at the end of last season, when he reviewed his results and found all but one of his many first prizes were with hens, even though he had sent both sexes to the races. He has designed his loft in such a way that both young and old can enter through the same trap and basically race on the same system, so it is instilled into the birds right from day one of their racing careers.
The old bird loft with the nest boxes, are partitioned into small nine box sections and the hens each have a partner. During the racing season they are separated, and the hens go into an aviary section behind a sliding door from which they are released for exercise through a basket sized hole in the front of the corridor. When they return, they trap through the single entry in between the young bird and old bird lofts and go back into their section without seeing the cocks all week. As youngsters they are housed on the opposite side of the entrance trapping system and raced on the “sliding door” method, thus preparing them for the old bird system.
The hens are trained around the loft twice per day much the same as widowhood cocks and fly really well said Gary. On basketing day, they are given a short time with the cocks in their nest box before being entered into the race. As the season progresses, they just get keener, all the while wanting to go to nest “they seem to know what day it is” said Gary explaining that they begin bashing at the door, separating them from the cocks, on a Friday.
He gave the hens a few hours with the cocks before sending to the Fougeres race, as he had agreed to collect a friend’s pigeons to take them to the marking station with him, so when he returned, they were very keen to stay with their partners. He timed a little later than expected as he had been watching the inland federation speeds on the day, and thought they would be faster than they were, so on verifying his pigeon online he was shocked to see his name go to the top of the result. A tense afternoon followed, and he fully expected to be beaten by lofts further in the north, but happily he held his top spot and a wins his very first Midlands National Flying Club Gold Medal.
Now named “Ava” after his granddaughter, the hen is a previous first prize winner and having only her second race over the channel. Her bloodlines are Janssen crossed Van Loon with both parents being purchased from Ray Westwood in Bromsgrove. The sire was originally bred by the late, great Barry Fellowes and was a proven producer. The dam was raced by Ray Westwood when she won three first prizes from two different loft locations and is bred down from original Planet Bros birds, when paired to Inett Bros and Ian Hacket birds. Gary sent fifteen to the race, had twelve return on the day, all in good condition, so well done all concerned. He would also like to congratulate all the other section winners.
I will be following up with a section report on the Fougeres race and will of course require you to send me your details and photographs to [email protected] if you are in the top four of the section. Please do not be afraid to blow your own trumpet, or just say a few words. What is important is that you all have the opportunity for your results and efforts to be recognised and I will elaborate or correct as necessary. Any news and views to me, Chris Sutton 01530 242548 or 07792 356330