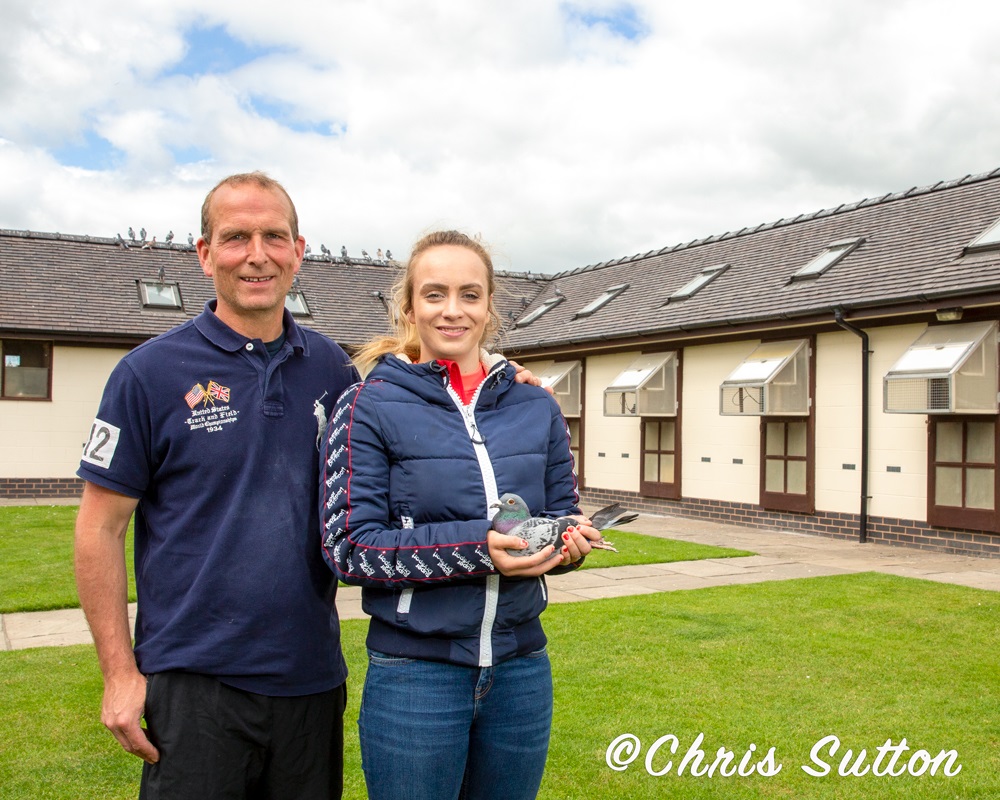 The third race of the season for the Midlands National Flying Club, sponsored by Gem Supplements, took place from Nort-Sur-Erdre on the 29th June with 347 Members sending 2899 birds. The weather during the week leading up to the race saw record high temperatures in France, so an early liberation at 6am was decided. The race controller reported that the birds cleared immediately northwards in one group. The forecast was for light easterly winds en-route to the French coast and east south east winds in the channel turning mainly south east in the UK throughout the morning. The overall winner was Jonathan Hamplett near Stafford and although the temperatures rose steeply during the race, his game chequer hen recorded an average speed of just under fifty miles per hour.
Jonathan followed his father, Harold, into the pigeon sport when they raced as H Hamplett & Son and has continued the family tradition of top performances. As a boy he raced his own pigeons in the lofts above the stables at the family home, and he said it was a good incentive as he would try to beat his father each weekend, which in turn reflected in the results at the club. He was surrounded by great fanciers who knew his well known and respected father and has grown up in the tradition of National racing.
In the early 1990’s Jonathan set up his own lofts at “Rose Cottage” and soon began to make his own name in the pigeon sport. He helps to run the family Builders Merchants business and has built himself a beautiful range of lofts which are immaculate both inside and out. Several sections are accessed via a corridor which runs the full length with each section having its own identical trapping system, attached to a sliding door. Nest boxes and box perches align the rear wall with a grid floor to keep the birds clean.
The winning hen was bred from birds acquired via a total clearance sale in Blackpool, held on behalf of a friend of mine and at the time I had arranged a private pre-sale viewing for Jonathan. He selected Lot 51, a Dutch rung cock called “Strong Boy” bred by Rens van der Zijde a top Dutch middle distance fancier. Rens created his winning lines with pigeons from Raoul and Xavier Verstraete and Ad Scharlaeckens. The hen he selected was Lot 53, a direct Verreckt-Arien from Tessenderlo the very successful partnership who excelled from sprint to middle distance. Obviously this MNFC winning hen has excelled in the distance she was bred for over many generations.
Raced on the sliding door system, she had proved herself in previous National races by winning 3rd Sect J, 8th Open Messac with the NFC in 2018 and 62nd Open NFC Messac just a few weeks before winning 1st South West Sect 1st Open MNFC, and during the week the hens are kept in a box perch section next to the cocks. They are exercised twice per day and trap into their own section before being allowed to run with the cocks for a period of time just before basketing for the race. Sometimes one or two hens will pair together on this system, which Jonathan takes advantage of by giving them a nest bowl and allowing them to sit the four infertile eggs.
They are trained lightly before racing begins and the federation is used from then on. He is happy not to have a clock set but insists they need the race experience, and there is safety in numbers when racing home getting fitter each week. Once the National races begin he selects a team to enter, with the rest going to the club to keep them going as racing hens need to be kept busy he said. He breeds around 150 young birds, although he admits to being a bit soft on the numbers if an egg chips out by accident “It may be a Champion” he said to his daughter Emma and they both smiled, knowing that to be the stock reply and a few more could be added.
His daughter Emma took a keen interest in the pigeons when she was younger, with Jonathan giving her a section to race her own pigeons to, just as his father had done for him. But has since discovered she has a huge talent in Javelin Throwing and has indeed represented England in the Samoa 2015 Commonwealth Youth Games. She is now attending Loughborough University, so her pigeon racing has been curtailed to enable her to reach her full potential on the Athletics world stage. When at home she loves to be around the birds and said, “it’s great to be around Dad too”. She was also chosen as the Birmingham Junior Sportsperson of the Year in 2017, which is a true testament to the Hamplett family’s drive for perfection continuing on into the next generation. Jonathan is rightfully very proud of her and hopes one day she will return to the pigeon sport and apply that drive for winning National races, into the third generation.
I shall of course be following up on this race with the section report and would ask you to send in your details if you were in the top four of your section to [email protected] That this was a very testing race for some sections, especially those on the eastern side of the club, and each pigeon making the top four deserve recognition for their efforts, I can only do this with your continued support.
News and views to me Chris Sutton on 01530 242548 or 07792 356330.